So they hurried off and found Mary and Joseph, and the baby, who was lying in the manger. When they had seen Him, they spread the word concerning what had been told them about this child, and all who heard it were amazed at what the shepherds said to them. – (Luke 2:16-18, NIV)

I am continuing to revisit and ponder the story of the shepherds and the role that God called them to play when Jesus was born. Not only were they the first people to witness the miracle of His birth, but they were also the first to share the good news of His long-awaited arrival. These “lowly” shepherds understood the significance of Who was lying in the manger before them, so they went out and shared with others, the awe and wonder that they had just beheld. Rather than being repelled by these shepherds, people were amazed at what they heard. What had been foretold so long ago, had finally come to pass. I imagine it was the hope that had been missing, finally being spoken aloud. Today, it is no different. For so many, hope is absent, and the need to know about or be reminded of the arrival and the reason for the season, is critical. People who normally would be repelled by an invitation to hear, are receptive and willing to partake in candlelight services and “traditional” Christmas activities where the truth about Christmas is told. May we each have the heart of a shepherd and embrace the hope that we know, so that we too are eager to share this hope with those who need it most.

The shepherds who watched, 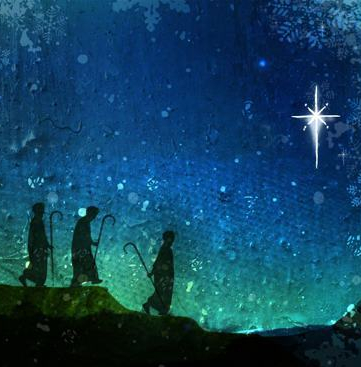 Their flocks through the night;

Were by God chosen,

To see first His light.

What they could go see;

As God had come down,

For you and for me.

The shepherds, they ran,

To find as they’d heard;

In awe and wonder,

Led them to go out,

And of this news tell.

Dear Heavenly Father, thank You that You show the least of us Your glory in incredible ways, and give us the grace to share with others, the beauty of Your goodness and grace. Thank You that You came down and made Yourself approachable and tangible to ordinary people. Forgive us for thinking that we have to be anything other than ourselves to make a difference in the lives of those around us. Teach us to trust You more, so that we would depend on You to show us how to love as You love each of us. Help us to make You accessible to many through our words and deeds. May many come into a lasting relationship with You. Be glorified O God, as we celebrate in awe and wonder, the incredible gift You gave us through Your Son. Amen.

For to us a child is born, to us a son is given, and the government will be on His shoulders. And He will be called Wonderful Counselor, Mighty God, Everlasting Father, Prince of Peace. – Isaiah 9:6