“I say this because I know the plans that I have for you.” This message is from the Lord. “I have good plans for you. I don’t plan to hurt you. I plan to give you hope and a good future.” – (Jeremiah 29:11, ERV)

No matter how our circumstances feel, God has good plans for each of us. Though we walk through seasons of heartache or hardship, what comes from it is ultimately good, and often leads to a place of hope and blessing that far exceeds what we could have anticipated or imagined. In my own life, dreams were dashed for a time, and could not imagine how the turn life had taken could lead to the sort of future I had hoped for. Incredibly, God provided and loved me through it and grew and prepared me for the new season I was about to enter. Today, I can look back and see His heart for me through it all. His strength and resolve were deposited in my heart in fresh new ways, and I now know His love far better than I ever had before. Though none of us know for certain what lies ahead, I have hope and trust that it is good. May we ever seek our Savior and trust in Him, as He has good plans for us that include hope and a good future.

Despite what we see,

For God’s plans are good,

As we let Him reign.

Reign within our heart,

And show us the way;

To trust the future,

Your love Lord, we pray.

May all know Your hope,

That fills hearts with love;

As we seek You above.

Dear Heavenly Father, thank You that Your plans for us are good. Thank You that in You, we have hope and a future. Forgive us for doubting Your hand in what lies ahead when things grow difficult for a season. Teach us to trust You through all things and at all times, as You are our strength and supply for our every need. Show us how to love those around us in ways that offer hope for the future and strength for right now. May many come into a lasting relationship with You. Be glorified O God, as we trust the hope and future that You hold in Your hands for each of us. Amen.

May our Lord Jesus Christ himself and God our Father, who loved us and by His grace gave us eternal encouragement and good hope, encourage your hearts and strengthen you in every good deed and word. – 2 Thessalonians 2:16-17

Peace I leave with you; My peace I give you. I do not give to you as the world gives. Do not let your hearts be troubled and do not be afraid. – (John 14:27, NIV)

I leave the gift of peace with you – My peace. Not the kind of fragile peace given by the world, but My perfect peace. Don’t yield to fear or be troubled in your hearts – instead, be courageous! – (John 14:27, TPT)

Jesus came to us, lived, loved, taught, modeled and performed miracles to show us His love and peace that last forever. When He returned to the Father, He sent His Spirit to be our peace, present in all things and at all times. God’s peace conquers fear and concern, and grants courage and strength where there seemingly should be none. The peace He left is present always, we need only seek Him to be made aware of what is already there. May we ever seek the Lord to be our peace, no matter what stands before us, for He is greater than all. 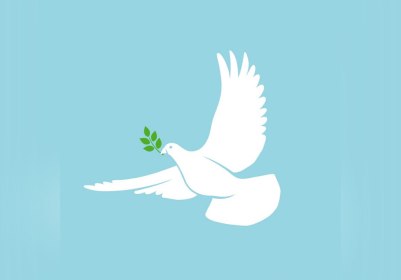 The Lord God, He gives;

To all who choose seek,

Among us, He lives.

The strength of our Source;

The power of love,

All trust we can give,

To our God, Most High;

He answers in love,

Dear Heavenly Father, thank You that You make peace possible, no matter what surrounds us. Thank You for Your presence that provides perfect peace. Forgive us for allowing our circumstances or surroundings to steal our peace, when You are ever-present to provide. Teach us to trust You more, so that we would depend on You when chaos seems to surround us, and praise You when we are aware of Your nearness that is providing our peace. Show us how to love those around us in a way that extends Your peace to places of unrest, as You alone help us to love best. May many come into a lasting relationship with You. Be glorified O God, as we seek You in all things and at all times to be our Provider of Your perfect peace. Amen.

The Lord gives strength to His people; the Lord blesses His people with peace. – Psalm 29:11

But the angel said to her, “Do not be afraid, Mary; you have found favor with God. You will conceive and give birth to a son, and you are to call him Jesus. He will be great and will be called the Son of the Most High. The Lord God will give him the throne of his father David, and he will reign over Jacob’s descendants forever; his kingdom will never end.” – (Luke 1:30-33, NIV)

The angel said to her, “Don’t be afraid, Mary, because God is very pleased with you. Listen! You will become pregnant and have a baby boy. You will name him Jesus. He will be great. People will call him the Son of the Most High God, and the Lord God will make him king like his ancestor David. He will rule over the people of Jacob forever; his kingdom will never end.” – (Luke 1:30-33, ERV)

Always, I am in awe as I reread the unfolding of the Christmas Story, and how it all began. Mary, a young and innocent bride-to-be, was visited by an angel of God. More than that, she was told that she would conceive and give birth to a son that would one day rule forever. There are multiple points that would leave any of us with eyes wide open and our jaw hanging toward the floor. First, she was visited by and had an actual conversation with a messenger of God! Since the angel led with “Do not be afraid,” I can only venture to imagine that the extraordinary sight found in the presence of God’s messenger was a bit overwhelming. Add to that, the message that was being delivered. She was then admonished for being highly favored with God. A bit later in the story, we recognize her bewilderment in being chosen and recognized by the Lord. Additionally, to be told that one would conceive and bear a child, let alone one that would rule forever, when there had been no participation in the process, would be beyond perplexing. Even so, Mary was willing, knowing in full, the potential ostracization, or far worse, that could result from this unknown walk of obedience. As we know, God protected her, and Jesus was born, even in the most unassuming of circumstances. Her strength and willingness to do whatever she was called to do, are likely the very character traits that led to her finding such favor with God. May we all seek the Lord and His strength, with willing hearts, ready to do whatever He asks.

To be Mary’s plight.

To conceive and birth,

Her choice to obey,

Where hearts are willing;

To trust and serve Him,

Always, in all things.

Dear Heavenly Father, thank You that You have shown us such incredible examples of people who are willing to walk where You call, even when it does not make sense at all. Thank You that as we take steps of willing obedience, we discover Your goodness, grace and faithfulness as well. Forgive us for the times that we have either neglected to do what You have asked, or have attempted to make our own way. Teach us to trust You more, as You are our Provider and the Prince of Peace. Show us how to love those around us in a way that demonstrates Your goodness and faithfulness, and grants courage to seek You for strength. May many come into a lasting relationship with You. Be glorified O God, as we seek to listen and obey all that You ask of us each day. Amen.

Those who know Your Name trust in You, for You, Lord, have never forsaken those who seek You. – Psalm 9:10

When we find ourselves lacking strength or courage or hope, there is One in whom we can place our trust to supply all that we need. The God of all grace comes along side us, and He hears our every cry. If we call on Him from our space of need, He meets us in His love. Though His timing and answers may not align with our expectations, the Lord always has our best in mind. We must take courage and be strong as we wait on the Lord, for His help is worth the wait. He is faithful to answer, so let us ever place our hope in Him.

Let us wait for God,

Choose be strong and brave;

For He grants courage,

The hope that we crave.

He’s our Source of strength,

To answers we seek.

Choose hope in the Lord,

All grace He imparts.

Dear Heavenly Father, thank You that in You we can place our hope. Thank You that You are our Source of strength and courage, and that as we wait on You, You meet us in our need and provide Your help. Forgive us for our lack of patience in the wait, as so often the answers we are asking take time, patience and perseverance. Teach us to trust You more, so that we would wait in hope, knowing that You are faithful to answer no matter how long the wait. Show us how to love those around us in a way that strengthens and grants courage to those who are losing heart. May many come into a lasting relationship with You. Be glorified O God, as we wait in hope for Your help with strength and courage that You supply. Amen.