From the beginning, creation in its magnificence enlightens us to His nature. Creation itself makes His undying power and divine identity clear, even though they are invisible; and it voids the excuses and ignorant claims of these people. – (Romans 1:20, VOICE)

For ever since the world was created, people have seen the earth and sky. Through everything God made, they can clearly see His invisible qualities – His eternal power and divine nature. So they have no excuse for not knowing God. – (Romans 1:20, NLT)

The evidence of God’s existence is everywhere. We need not look far to stand in awe and wonder at the power of His mighty hands, as our eyes take in the display set before us by the Divine. No great cosmic accident could cause the mountains to rise and the seas to know just how far to come ashore. Though there may be commonalities in genetic coding, there is no one on the planet that can convince me that my children evolved from apes. Only a loving, powerful and creative God would give such attention to all things. Though I have only seen but a small portion of the planet, the parts that I have seen continue to leave me awestruck at the glory of God as He gave. Beyond that, when I look in the eyes of those whom He has placed in my life to love, His power is proven again and again, both by how He moves, and through the grace and goodness He grants to us and through us. May we never stop being aware of everything that He has made, and stand in awe at the mighty works of His hands.

Since the world began, 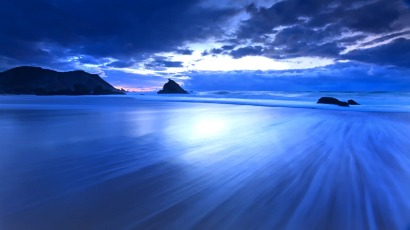 God’s hand has been clear;

Through sky and earth near.

In all things He’s made,

We see the unseen;

What His divine means.

No one has excuse,

For not knowing God;

All around us He’s seen,

Let us stand in awe.

Dear Heavenly Father, thank You for the evidence of You that is all around us. Thank You for all that You have created for us. Forgive us for not slowing down to recognize the work of Your hands in all things. Teach us how to see the world through Your eyes, so that we would have Your heart for people and treat well, the gift of our surroundings that You have made. Show us how to love those around us so that we can be further evidence of Your hand and heart in the world. May many come into a lasting relationship with You. Be glorified O God, as we stand in awe of all that You have made, and seek to see it all through Your eyes. Amen.

For it is commendable if a man bears up under the pain of unjust suffering because he is conscious of God. – 1 Peter 2:19