Yesterday, my pastor continued in a series titled, “Miracles“. The passage from which he brought forth his message, was Mark 4:35-41. This story is quite familiar to many, as it is the story of when Jesus calms the storm. That being said, there were elements within the unpacking, that I had not quite seen in that particular light before.

First, when the disciples were crossing as Jesus had charged them to do, a furious squall came upon them while He slept. The disciples were terrified, yet Jesus was able to sleep. Jesus was able to rest because He was doing what His Father had called Him to do, therefore He was at peace. As for the squall, there is so often a push back from hell when we move in the direction to which God has called us. (For on the other side, was the demoniac waiting to be set free, whose testimony would change the lives of many.)

When the disciples woke Jesus and asked Him if He even cared if they drowned, He rose and commanded the wind and waves to “Quiet! Be still!” Speaking to a storm is no ordinary response. Typically, there is no need to rebuke an object. However, when what was occurring was spiritual in nature, the rebuke was for that which was at the root, to stop. (And not likely in a still small voice)

Just as Jesus commanded for that which rose up against them to “BE STILL!”, we too have the very same power within us, when we find ourselves in a storm. We are best able to weather the storms if we: 1) Identify the storm, 2) Speak to the storm (claim God’s truth), and 3) Trust the outcome to God. – (Pastor Jon McIntosh)

When fear rises up, 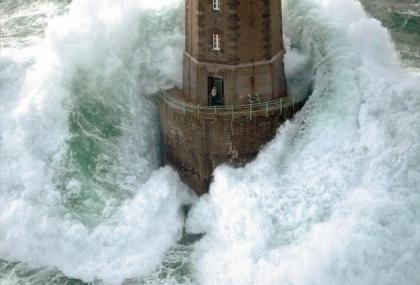 and floods us with lies;

the intent of hell,

is our quick demise.

Yet within our hearts,

the power to speak;

to silence the storms,

and strengthen the weak.

For God did not give,

a spirit of fear;

He is ever near.

so we need not fear,

each time the wind blows.

Dear Heavenly Father, thank You that when the storms of life come all around us, You are already in the boat beside us. Thank You that though things may seem dire, You have set a course before us and will not leave us. Thank You that when resistance comes against us moving in the direction to which we are called, You have already placed Your power within us to stand firm and speak to the storm. Forgive us for allowing fear to reign, when fear is only based on what our eyes perceive, rather that Your truth. Teach us to trust You and the outcome You have for us, rather than what we imagine. Lead us to love others in such a way, that we can offer calm in their storms and hope in their places of panic. May many come into a lasting relationship with You. Be glorified O God, as we hold fast to Your promises and continue moving in the direction in which we are called. Amen.

© Shannon Elizabeth Moreno and Revelations in Writing, May 2011 – present.

But because of His great love for us, God, who is rich in mercy, made us alive with Christ. – Ephesians 2:4-5