“Without warning, a furious storm came up on the lake, so that the waves swept over the boat.  But Jesus was sleeping.” – Matthew 8:24

Jesus was so secure in His relationship with His Father, that He was able to rest, to actually sleep, in the middle of a storm as it came upon the lake and threatened to sink the boat. 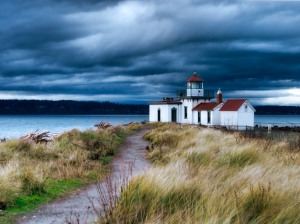 The imagery in this is astounding.  Personally, I know that even if I had somehow fallen asleep in the calm, the jostling and jarring of a boat being tossed to and fro by the wild wind and waves would not only wake me, but likely fuel some sort of frenzied state of panic.  The fear of death by drowning would likely dominate my thoughts.

Yet Jesus did not even wake until the panic of those present persisted to the point that they at last sought He who held the solution.  It took only two words, “be still“, and all again became calm.  Though the disciples had walked with Him and watched as Jesus had healed and helped the masses, they still stood awestruck at the amazing power presented as He spoke so that even the wind and waves obeyed Him.

Jesus modeled how I am to trust the Father.  Though Jesus was tried, tested, and even tortured, His faith in the Father never faltered.  He knew that His Divine Dad had Him in His hands.  I need to remember that He who redeems, remains ever present, regardless of the intensity of the storm.

My prayer is that my Heavenly Father might forge a faith in me that does not falter, even in the eye of the storm.  Faithfully, He delivers me from my fears, and continues to teach me to trust Him more.  He is so good and I am so thankful that He holds my heart and my hands, and He lovingly leads me as I learn to surrender and trust Him with my all.